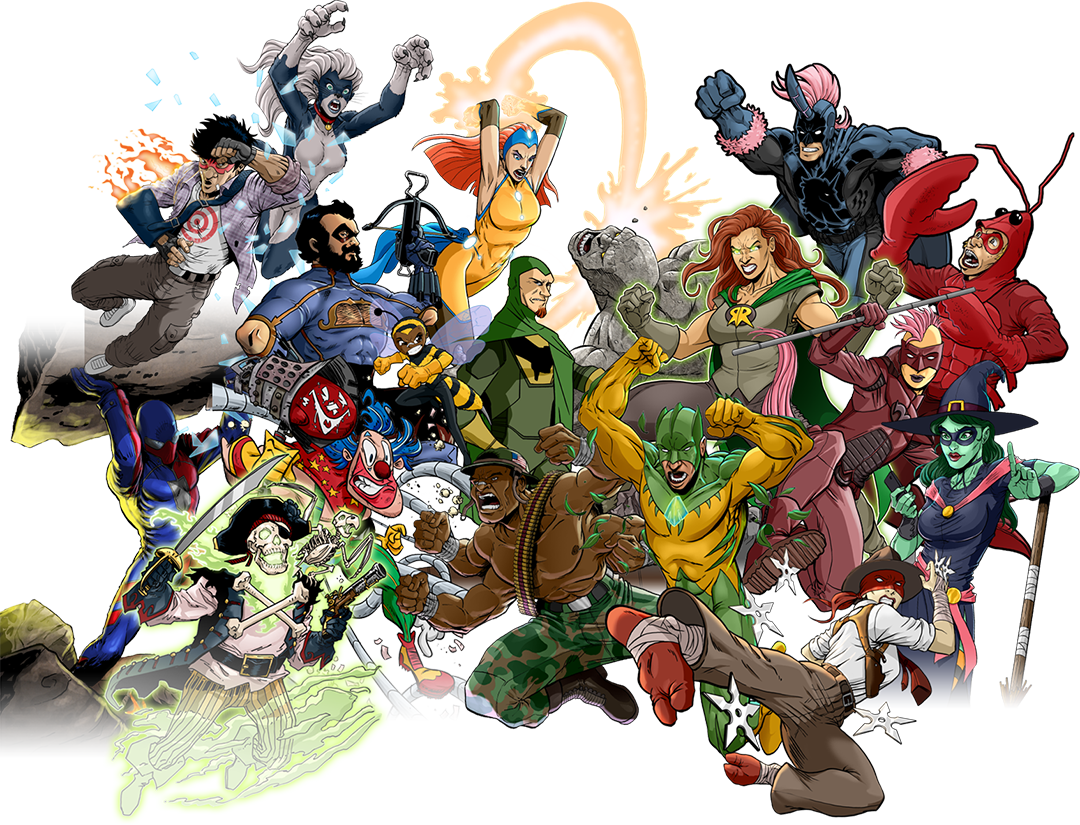 To get you started, the game comes with presorted decks. If you’ve screwed those up and would like to play with them again, click on the buttons below to see how to reconstruct them.

Once you get into the swing of the game, we strongly encourage players to build their own decks. See the “Building a Deck” tab below for how to do it.

The goal of Super Powered Smash Masters™ is to defeat all the rival characters with at least one of your team’s characters left standing.
If all of your characters are defeated, you lose!

The game is played with a variety of cards that do different things. There are 5 types:

Before you start playing, every player needs a “Character Stack” and a “Deck”.

2. Draw 5 cards from your Deck into your Hand. You can look at them, but don’t let others see!

4. When all players have chosen their teams, everyone flips their Character Cards over at the same time.

Flip a coin (or a car) to see who goes first. Play moves clockwise.

On your turn you can do one of the following actions:

– Attack a rival character with a Smash Card.

– Attack a rival character with a Team-Up Card.

– Use a character’s Power.

– Place one of your stunned characters into the Defeated Pile and draw a new one from the Character Stack to replace them.

– Discard an unwanted card in your Hand and draw another from the Deck.

If you can’t perform an action during your turn (or choose not to), you MUST Discard.

Smash Cards are a basic attack that a character performs against a rival character.

To Attack, place a Smash Card in front of an active character on your team and announce which rival character you’re attacking. Then draw a card to replace that one. Remember: “Play a card, draw a card!”

– Players can counter back and forth as long as they have Smash Cards to counter with. (Don’t forget to draw new cards!)

– When a character is Stunned, rotate the card sideways.

– Stunned characters are defenseless. They can’t Attack or Counter with Smash Cards or Team-Up cards, nor can they use their Powers.

– A Super card can Revive its corresponding character, if they are already stunned.

– If all the characters on a team are stunned, you can still play Super and Story cards.

– Team-Up cards can be used at any point during a smash battle – like a smash card – but, once played, a Team-Up card can only be countered by another Team-Up card. Now the losing character isn’t just Stunned, they are Defeated.

– You must have two active characters on your team to use a Team-Up Card.

– If using a Team-Up card to initiate an attack, choose one of your characters to be the “lead” attacker. If you lose the battle, this character will be Defeated. The second character is not affected by the outcome of the battle.

– Team-Up cards can be used in place of Smash Cards in any facet of the game (for example, in response to a Story or Super card) but the same rule always applies: you must have two active characters to use a Team-Up card.

– Only draw new cards when your hand has less than 5 cards.

– Only draw new characters when you have less than 3 characters on your team.

– Do not change your character’s positions. If a character is Defeated, place a new character in the vacant spot.

– If there are two empty spots, you may choose where to place your new characters .

– You may choose NOT to use your character’s powers.

– If you play a card that allows you to draw more cards, draw one card to maintain 5 cards in your hand, and then draw the new cards.

– Some powers allow you to acquire more than the standard 5 cards in your hand… but for the sake of balance, no hand should have more than 10 cards.

– If your Deck runs out, reshuffle your Discard Pile to make a new Deck. Easy!

– It is illegal to cause yourself to lose the game. You may face steep fines.

– Powers of stunned Characters aren’t available until the turn after they’ve been revived.

– Unless stated, you can’t choose a different Character to attack part way through a Smash Battle.

– If you’ve reduced a child to tears… you might be trying too hard.

– Super Powered Smash Masters is best played with 2 – 8 players, but we’ve looked into this, and apparently there’s no legal way to enforce that rule. Just know that we’re watching. Always watching.

– It is illegal to cause yourself to lose the game. You may face steep fines.

– If a card you’re playing says “all teams”, it includes your own team.

– Powers of stunned characters aren’t available until the turn after they’re revived.

– If Cool Man is the last character on a team, his Super Card does not kick him off the team.

– Reshuffle your deck when you run out of cards.

– If you’ve reduced a child to tears… you might be trying too hard.

Do NOT follow this link or you will be banned from the site!